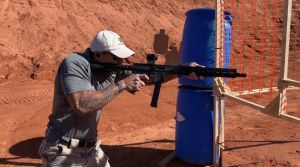 Being a lone operator is a risky way to fight, so whenever possible it is to your advantage to face danger with the help of teammates.

Soldiers are told to back up their “battle buddy” (teammate) and may find themselves manning an LP/OP (listening post/observation post) together to serve as lookouts or manning a fighting hole together to be part of a unit’s defense. Four soldiers make a fire team and three fire teams combine to make a squad. Infantrymen get more experience with team tactics than most other professions do and it is worth considering what they know that might be beneficial for your needs. Whether you are in a group of police officers cordoning a crime scene containing armed bank robbers or you are husband

and wife CCW holders, it is worth considering how bounding, leap frogging and room clearing may fit into your defensive tactics. Soldiers utilize team tactics that include movements from egressing (withdrawing) from a location to assaulting a position and clearing a room or building. These techniques can all be utilized in two-man situations. A term we like to use in the military is “movement to contact”. In a situation for a law enforcement officer it could be called, “responding to a threat”. Movement is key. There are different options for movement to contact, but some of the most important ones that come into play for law enforcement, home defense or any public setting are bounding, leap frogging and room clearing. Bounding and leap frogging are both used to improve your position or provide security while getting somewhere. You can’t just walk up to your target. Actually, you can, but that is not advised. Bounding and leap frogging will allow you to keep guns pointed down range at your target without sacrificing your safety. Before you engage in your movement, understand your surroundings and communicate. Communication is a huge factor within any tactics. I preach it all the time: we must be able to “shoot, move and communicate”. 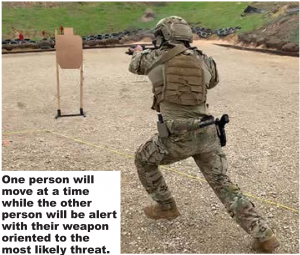 Once the two-man element is ready to move, you should always find the nearest cover and never cross each other’s paths. A good reference is to stay left or stay right. Keep situationally aware of where your buddy is and where your target is. Bounding is a pretty easy concept. It is slower than leapfrogging, but safer. One person will move at a time while the other person will be alert with their weapon oriented to the most likely threat. The mover will travel to the same covered location as their partner or to a close-by position of cover in the same linear direction. Specifically, the first person to move will identify the nearest cover and announce, “moving” and will hear a confirmation from their partner saying, “move!” and start advancing toward the desired destination while the second person stays and covers him or her. Once that person is set behind cover, they will yell, “set” to notify the other person they are in place. That gives them a confirmation that they can start moving, and the mover will then yell, “moving”, but will not move until the other person confirms back with a “move!”. This will be repeated as many times as necessary to cover the distance desired. Notice how the communications between the two are very short and simple commands. There can be a lot of noise and confusion in a stressful situation just like this one. You wouldn’t be conducting this tactic if you weren’t in a situation that required it, and this may mean you are in an active shooter situation. Under stress, it is much easier to understand short and simple commands, having a “direct voice” is important. Your mind can only do so much, so instead of saying full sentences, we make it easier by giving a short, direct statement. The individual bounds should be kept short. If there is not any cover within a reasonable distance, you may bound to the ground and simply go prone. This may even be done indoors such as from doorway to doorway on opposite sides of a hallway in order to retreat from an active shooter. Instead of hearing your partner shout “set!”, you may simply hear their shots alerting you that they are set.

Leapfrogging will allow a team to cover ground faster. In the military we use this during patrols or during movement to contact. This just allows the team to get to their designated target faster or get out of a danger area faster. This also spreads the team out, allowing them to be spaced to make it harder for your enemy to engage you. The team will be set and one individual will conduct movement to the nearest cover utilizing communication while the other covers. Once the individual is set, the other partner will conduct their movement and move past their partner to the chosen position of cover beyond their partner. Again, this is repeated, thus making a leap frogging effect. There are, of course, situations where you should not be yelling out commands; for example, maybe there is an intruder in your house and you don’t want to be yelling out commands for them to hear you. Non-verbal commands may be best utilized. This may be hand signals, eye contact or a simple motion. All of this is about movement and communication, but presuppose safe and effective individual firearms skills. These are all very important, and people frequently overlook them. Bounding and leapfrogging are just as valuable for breaking contact, that is, trying to break away from a threat. This can also be done to provide security as a group gets away from danger. You and your partner might hold your positions of cover, cutting off an attacker’s access to other members of your party behind you. Once they are clear, the two of you leapfrog away alternately providing security for each other.

There are multiple factors to take into consideration when clearing a room. Typically, your basic room will have four corners. First is the observation of what type of room you are being exposed to. There are

center-fed rooms and corner-fed rooms. These are descriptions of where the door is positioned. To make things simple when we talk about corners for a corner-fed room that entryway counts as “a corner”. When approaching a room that you are going to enter as a two-man element, you identify what type of room it is and stack on the door. Number one man will approach the entry with his muzzle on any gap at the doorway or on the door seam if it is closed. The number two man will follow behind him. There are many techniques for clearing/ entering a room. The number one man can open the door or the number two man can come around and quietly open it and follow one in. If it is an open door, then the best thing to do is to stack. You never want to ignore an open door. That entryway is what we call the fatal funnel. It is the only known entrance to that room and the enemy has the advantage and only has to keep his gun pointed at the door and wait for a target. Clearing rooms is no easy task. The best way to attack this and win, is to aggressively enter the room with a partner if an entry is warranted. Military and law enforcement teams may use non-lethal flashbang grenades for distractions, but even having somebody throw a rock through a window can distract attention from an entrance at a critical moment. The number two man will signal the number one man to notify them they are ready to enter, possibly with a pinch and once you open that door, it is critical that you enter swiftly. As soon as the number one man enters the room, their gun is in that doorway pointing straight into the direct front and then to his corner (whichever side he wants to claim). The number two man’s job is to get his gun and himself through that door at the same time as number one man, though he will inevitably be in second place. Upon entering the room, the number one man will pick either side he wants, find his corner and enter two corners deep into the room. The number two man’s job is simple, just go the opposite direction of number one. His job is to get in that door and cover number one man’s back, because once he digs into his corner his back is exposed to the unknown threat on the other side. The number two man will only go one corner deep into the room. These corners are his hard points and as he gets to his corner he will scan the room for additional threats. When you get to your corner, be situationally aware of your partner. We create sectors of fires inside the room for safety guidelines. Your farthest limit to be able to engage on a threat would be in front of the muzzle of your partner’s gun and the other is to the farthest wall going the opposite way. Fingers stay off triggers until the decision to fire is made and muzzles don’t cross teammates. Once the room is cleared, a pair can move on to the next door and continue the process. Entering a room is accepting risk, so if there is not a need to enter, don’t do it. For example, if you are conducting movement in your house with a known threat, but unknown location. You must get to your kids and you may bypass all the rooms to go directly to the known location of your kids. These are simple movement techniques that allow you to move faster down a hallway or even an alley or street. For two-man tactics, you would want to move in a staggered column where number one man is in front with gun forward and number two man will be offset of him and able to have his gun forward as well. This is an easy concept. As you move forward, you have two guns up and number two man’s second job is to check the rear from time to time. As you move forward you will have openings and rooms on both sides. The person on the left will scan the open danger areas on the left and the person on the right will scan the right. While moving forward, if there is an open door, all you need to do is point your gun in the direction of the open area as you move past it and continue to move and repeat until you reach your destination. Some people have called that “putting a muzzle in the door”. Two-man tactics require safe and competent individual firearms handling. High quality training is a prerequisite for safe multi-person action. Whether you train with Strategic Dynamics or another provider, shooting, moving and communicating with multiple people should not be attempted without such high quality training.