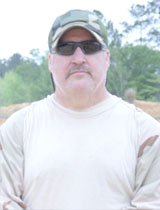 Ronnie attended and graduated from the US Army Center for Excellence as a Certified Instructor while at FT. Benning, working with Special Forces and Infantry Units instructing Advanced Situational Awareness. He also taught the full spectrum of asymmetrical warfare including the deployment of source development and management for target profiling. Ronnie has deployed and advised as an embedded Counter Narcotics Subject Matter Expert (SME) with US Army Special Forces (SF) and Navy Special Warfare Command (NAVSWC). He has worked with CIA/DIA/OGA’s on targeting and execution of Capture/Kill operations.

Ronnie is a Worldwide Personal Protective Services (WPPS) Certified Close Protection Specialist and has worked and trained US and Foreign Military assets in close protection and convoy operations while deployed for the DOS/DOD.

Ronnie is also a 28 Year Law Enforcement Professional with over 20 years Supervisory and Command Experience. Ronnie has supervised Specialized Organized Crime and Narcotics Units and Task Forces as a Sgt. Investigator, Lieutenant and Commander.