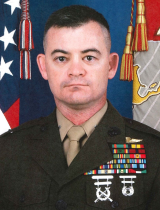 Michael has over 30 years of combined military and law enforcement experience as a United States Marine and as a Texas Peace Officer. Michael enlisted in the Marine Corps in 1986 where he was trained as a Scout Sniper. Leaving active duty in 1990, he returned home to Texas where he worked as a correctional officer for the Texas Department of Criminal Justice until becoming a full-time peace officer in 1992. In 1999, Michael re-enlisted in the Marine Corps where he served as a Nuclear, Biological and Chemical Defense specialist and attained the rank of Sergeant. In 2002, he was selected to be meritoriously commissioned as a Second Lieutenant. After holding multiple commands and participating in combat actions in support of Operation Iraqi Freedom (Ramadi), Michael left active duty as a Captain in 2011. In 2013, Michael re-activated his Texas Peace Officers License and is currently employed as a Full Time Peace Officer assigned to the DWI / Traffic Enforcement Division.