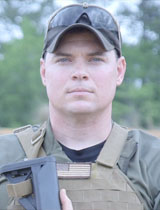 Joel Reilly has over 19 years of global operational experience and has trained military leaders and officers extensively . Joel is currently serving as a Master Sergeant with the United States Marine Corps and is assigned to 1/23 in Houston, Texas where he serves as the Battalion Operations Chief. With multiple combat deployments in Iraq and Afghanistan, Joel has experience at all levels in a forward deployed Marine Infantry Unit.