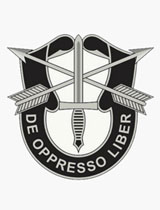 Cody is a combat veteran and current Army Special Forces Green Beret Medic (18D) with 9 years of military experience and 4 years as a Private Military Contractor (PMC). Cody spent 4 years in the Marine Corps as a Scout Sniper with multiple combat deployments from 2007-2011. From 2011-2015 Cody deployed overseas as a PMC for 11 rotations as a member of both high visibility and low visibility PSD teams in Iraq. As an additional duty, he filled the roll of Designated Marksmen.

As an active duty Green Beret Special Forces Medical Sergeant (18D), and a member of a Crisis Response Force, Cody brings a wealth of knowledge and experience related to the Tactical Medical World. Cody is also a graduate of the USMC Sniper Course, Urban Sniper and Mountain Sniper Course, as well as Honor Graduate for the US Army Special Forces Advanced Target Analysis and Exploitation Techniques Course.